Cooking for a restaurateur/chef is intimidating. Especially so when you are enlisted with the task of introducing a dish to his palate.

I met with Pushpir Bhetia — the owner of the Indian restaurant called Guru, in Somerville — in February this year for an interview, as part of my research work on Sikh immigrants in Boston.

Apart from talking about the prime issue — Sikhs being target of hate crimes in the US especially after 9/11— we talked a lot about food.

During one such conversation, we talked about fish. When you are talking about food and fish isn’t mentioned, a Bengali might quickly lose interest. Bhetia knew this. He asked me what kind of specialty fish dishes Bengalis dish out when it comes to entertaining guests.

Doi Maach, I said. Fish cooked in a yogurt-based gravy.

Pungent mustard oil is tempered with bay leaves, cardamom, cinnamon, cloves and red chilies and as soon as the warm spicy flavor hits the nose the creamy ginger-garlic-onion and tomato paste is introduced. Turmeric, cumin powder, salt and sugar goes in next and the mixture is cooked till the oil separates from the gravy. Half a cup of well beaten yogurt is then added. After cooking the mixture for a couple of minutes half-cup water is introduced to the gravy and once it comes to a boil the lightly fried pieces of rui are added. The mixture is then cooked till the desired gravy consistency is achieved. A sprinkle of garam masala and the dish is ready to be enjoyed with warm fluffy white rice.

Bhetia seemed intrigued by the recipe and I promised to bring him some doi maach once my semester was over.

My semester was over by the last week of April. I got busy doing nothing.

But yesterday I decided to act on my promise. I cooked doi maach but the whole cooking process was a bit intimidating, like I said. The thought that I was cooking for a chef kept badgering me.

Once the dish was ready I packed it carefully inside a container. When I arrived at the restaurant, Bhetia was busy cooking baingan bharta.

I handed over the doi maach to him along with the recipe. I was planning to leave but he asked me to wait, as he scooped out a spoonful of rice, from the rice cooker, on a plate.

“This is going to be my lunch today,” he said, as he opened the container I brought him.

It was like a nightmare come true; my paper was being graded right in front of me!

I stood in the kitchen as I watched him eat. It took him around ten minutes to finish the six pieces of fish that I had carefully nestled in the container for him.

“So, what’s the verdict?” I asked timidly.

Pointing towards the empty, gravy stained container he said, “Need I say more?”

Parfait for me: Blueberry yogurt, granola and fresh berries.

Parfait is French for ‘perfect’, and my taste buds have taken a fancy to yogurt parfaits lately.

While the word ‘breakfast’ sounds very comforting, I must admit that the thought of toiling over pots and pans, early in the morning, to dish out one is rather discomforting. When it comes to breakfast, I prefer something that doesn’t involve the use of the stovetop, microwave or oven. And yogurt parfaits adhere to my preference.

A medley of fruits (go for seasonal [organic?] fruits); yogurt of your choice (plain or flavored) and a generous sprinkling of granola (I get mine from Whole Foods [really?] )has the potency to kick start your day in a healthy way.

With homemade parfaits you have control over the calorie intake and also partake in the “know your food” part of the “Know your Farmer, Know your Food” campaign. Buy the ingredients from your local farmers’ market and you will get to “know your farmer” too.

The parfaits act like analgesics in calming down cravings in-between-meals and also does a commendable job in pleasing your sweet tooth, in the guise of a dessert.

The smooth and luscious yogurt combined with sweet berries, interlaced with bursts of tartness, and the crunchy granola won’t disappoint you!

Summer’s showmanship never fails to amaze in this part of the world, a stark contrast to the almost interminable and harrowing one back at home.

To rephrase Shakespeare: as flies to wanton boys, are denizens of India to summer’s wrath!

Nevertheless, summer reminds me of how the simplest things in life bring the greatest pleasure. Take lemon for instance—nothing’s more rejuvenating than a glass of nimboo paani (lemonade) during summer. I covet those days when stepping out in the sun invariably meant an ice cold glass of nimboo paani would be awaiting my return. Vanquished by the raging sun I would come home exhausted, but the concoction of freshly squeezed lemon juice, cold water, spoonful of sugar and a dash of salt, worked as an instant fatigue eraser and mood enhancer—power of Vitamin C I guess.

Want to rev up this humble drink? Add seltzer (carbonated water) infused with mint leaves instead of plain H2O and watch the magic unveil.

Another of my summer favorites is watermelon lassi—chunks of sweet watermelon, couple tablespoons of yogurt, sprinkle of sugar and a dash of lemon juice whizzed in a blender. Its pinkish color and frothy texture drew me to it as a child—you eat (drink) with your eyes first remember?

I remember how on sultry days ma used to whip up this delicacy to welcome dad home from work. When pangs of nostalgia become unbearable I seek refuge in my blender, which whips up this frothy concoction for me in seconds. 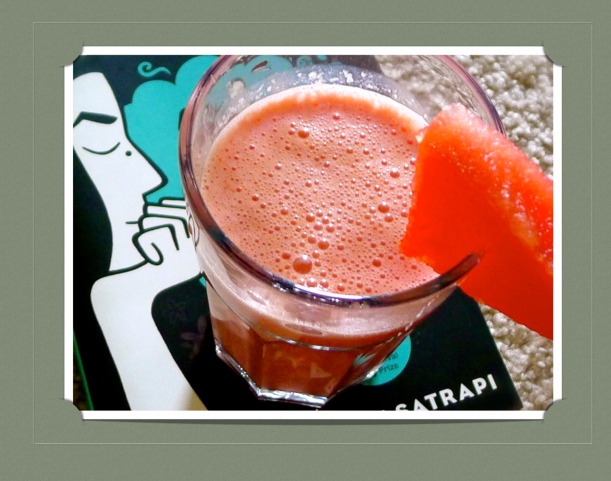 But nothing spells summer like mangoes! My latest fascination with the king of fruits comes in the guise of mango lassi—a rich intoxicating blend of fresh mango pulp and yogurt—a huge crowd pleaser at Indian restaurants in the US. The first time I savored this drink I was bowled over by its grip on my taste buds and the fact that I was oblivious to its presence in India!