Today I cooked haleem for the first time.

For those who are not familiar with haleem, it is an uber-flavorful dish made of meat, spices, lentils and cracked wheat and has a soup-like consistency.

“During the holy month of Ramzan, Muslim brethren go on fast from dawn to dusk and relish the steaming Haleem to break their fast during Iftaar (evenings).”

The dish originated in Iran and Afghanistan, and was brought to India during the Moghul regime. Haleem in Arabic means ‘patient’, and rightly so. When prepared the authentic way, it takes a minimum of six to eight hours to cook. You sure need a lot of patience for that!

You need to watch this video to understand how labor-intensive the authentic preparation can be. The video documents cooks preparing 220 lb. of haleem at a restaurant in Hyderabad, India.

I am the kind who wouldn’t labor for over six hours to prepare haleem or any other dish. I would rather invest that time in locating a restaurant who would do it for me. Here in Boston, Darul Kabab, a Bangladeshi restaurant satiates my love for haleem.

But today afternoon I decided to prepare haleem, my way and that means I didn’t look up recipes on the Internet. I used ingredients that were available in the pantry. I think the weather today played a huge role in fueling my desire to prepare the dish. It was raining, it still is, and I was craving for a warm and flavorful dish sporting a thick soupy consistency.

I didn’t have cracked wheat so it would just be a medley of lentils — masoor, moong,

The best part of coming up with your own recipe *** use whatever is available and substitute or leave out ingredients as you wish. Also you can just eyeball the measurements.***

It took me about an hour and half to cook the dish; the credit goes to my six-year-old pressure cooker.

After adding a mixture of olive oil and butter (generally ghee is used) I threw in the whole spices and then added the ginger-onion-garlic-green chili paste in the pressure cooker. The powdered spices and the goat meat went in next along with the Heinz ketchup. When the oil began to separate I added the pre-washed lentils and stirred it for a while before adding water, at least four to five cups.

After closing the lid of the pressure cooker, I let it simmer for about an hour. Then I cranked up the burner and after seven whistles turned it off.

I let it rest for a while and when I opened the lid of the pressure cooker, a waft of flavor that stirs in temptation began lurking in the kitchen.

I squeezed in juice from half a lemon, as a final touch, and there it was — my shortcut haleem. And I didn’t even have to compromise with the taste! If I had slow cooked it for six hours the only difference would have been that the meat would have fallen off the bones and melted like the lentils. But honestly, I don’t think my jaws would mind the extra workload for that comes with a prize — saving like five hours of cooking time.

++Note the single strand of cilantro leaf in this picture, well there’s a story behind it. I opened the refrigerator and pulled out the almost forgotten two-week old bunch of cilantro leaves. All but this single one had turned yellow.

I had invited a couple of friends over for dinner and I was contemplating ways of surprising their taste buds.

As I opened the refrigerator door and stooped down to pick up the pack of boneless chicken thighs, sitting on the lowest rack of the refrigerator, it cried out “I challenge you to dish out a new curry today.”

I wouldn’t have taken up the gauntlet but for the bunch of fresh cilantro resting right next to it.

The food processor was called to action. Ginger, garlic cloves, a medium sized onion, half a cup of yogurt and the whole bunch of cilantro were blended into a marinade in no time.

The chicken pieces were coated in the marinade and set aside for half an hour. A drizzle of oil into the pan and in went the chicken. Fifteen minutes later my “Cilantro Chicken” was ready.

At dinner time I boasted about my new recipe. But I didn’t receive the applause I was fishing for.

After my friends left that day, I Googled “dhania (cilantro) chicken”. A bunch of recipes sprang up on the screen.

I was preparing the same cilantro chicken, which I had once claimed to be my brainchild, for friends who were coming over for lunch.

But this time it had to be ‘my cilantro chicken’. So I dry roasted a bunch of whole spices – black and green cardamom, cinnamon, clove, star anise, mace – and put them in a grinder. I sprinkled the powdered spices over the curry just a couple of minutes before turning off the gas burner.

And I named it “Curry in a hurry”. 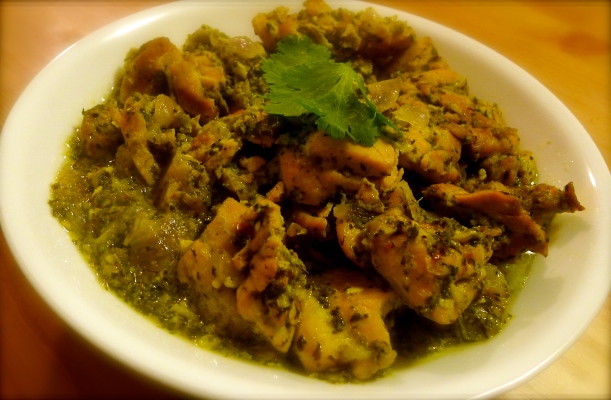